As a health and exercise professional, you will undoubtedly encounter female clients who are experiencing menopause. Menopause means the permanent “pause” of menses, which indicates the end of a woman’s ability to bear children, and is a series of overlapping stages that may take years through which to progress (Table 1). The World Health Organization estimates that by the year 2025, 1.1 billion women will be age 50 years or over, all of whom will be, or soon to be, experiencing menopause.

Typically, menopause is a natural and steady process in which the ovaries reduce their production of the female sex hormones estrogen, progesterone and testosterone. These hormones allow a woman to become pregnant and menstruate, but they affect many other functions in the body as well, including the circulatory, urogenital (urinary and vaginal) and the skeletal systems. When the production of these hormones declines, menopausal symptoms such as weight gain may occur.
Fluctuations in reproductive hormone concentrations during a woman’s life predisposes her to excess weight gain (Table 2). During the perimenopausal stage, most women gain about 5 pounds (Wing et al., 1991); however, some women may experience a more significant weight gain. While weight gain seems to be common, it is the shift toward abdominal fat distribution that raises concerns. Research has found that post-menopausal women have greater central or android fat distribution, as well as greater visceral abdominal adipose tissue compared to pre-menopausal women (Wang et al., 1994).

Hormonal Changes and Weight Gain
Weight gain is caused by an energy imbalance in which intake exceeds expenditure. For example, Lovejoy et al. (2008) found that over a four-year period women who transitioned from pre- to post-menopausal status experienced declines in energy expenditure of approximately 200 kcals per day. In other words, as women progress through menopause, they may become less active, which can lead to weight gain. However, declines in energy expenditure alone does not explain the increase in central adiposity, as hormones also play a role.

Estrogen is a key regulator of growth and differentiation (the process by which cells change from relatively generalized to specialized) in a wide range of tissues, including the reproductive system, mammary glands and the central nervous system. Estrogen is linked to metabolism, in which the hormone has been known to play an important role in regulating adipose development and deposition in females (Cooke and Naaz, 2004). Estrogen has also been shown to reduce food intake through actions on the hypothalamus (Geary et al., 2001; Wade et al, 1985), which means that as estrogen declines, food intake tends to increase. Leptin, a hormone that is involved in energy intake and expenditure, may also be regulated by estrogen (Cooke and Naaz, 2004). As estrogen declines, leptin increases, which, in turn, signals a need to increase food intake. Studies also show that estrogen deficiency is related to a preferential increase in visceral fat (Carr, 2003; Poehlman et al., 1995).

The Role of Estrogen Receptors
Discovery of estrogen’s effects on the body as a regulator of energy expenditure, appetite and body weight has stimulated deeper investigation into the role of estrogen receptors. Recent research has focused on estrogen receptor-a (ERa), which is found in the hypothalamus. In animal studies, the impact of obesity has been shown to be mediated primarily through ERa. The disruption of ERa in the hypothalamus, where researchers remove the receptors from the brain of mice, leads to weight gain, increased visceral adiposity, hyperplasia, hyperglycemia and impaired energy expenditure (Xu et al., 2011; Ribas et al., 2010). While these studies focus on mice, the implications to human physiology are quite strong. Further research is ongoing in this area and proves to be an exciting possibility for strategies and treatments for women to prevent weight gain and central adiposity during menopause.

Weight Gain is Not Inevitable
Although estrogen is capable of producing effects on adipose tissue by acting indirectly through other tissues that regulate appetite, energy expenditure or metabolism, this does not mean that weight gain is inevitable. Exercise studies show that weight gain and especially visceral fat deposition can be lessened in menopausal women. Walking, high-intensity interval training (HIIT) and multi-component (cardiorespiratory, strength and flexibility) exercise programs can all produce favorable results related to improvement in body composition (Maillard et al, 2016; Aragão et al., 2014; Irwin et al., 2003). While it may challenging for your clients who are experiencing menopausal weight gain, it is not a losing battle. With your guidance, weight loss can occur during this time of transition. 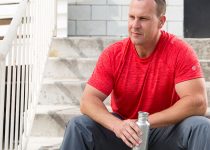