“The years sure have been kind to you!” I heard from an old friend from my high school days when I encountered him recently. “Nah, lifestyle has.” I replied. This exchange got me thinking: Is the passage of time “kinder” to some people and “meaner” to others? Does growing older harder on some people than others?

When it comes to a wide range of health issues, you hear things like, “It runs in my family.” The reality is that, except for truly genetically inherited diseases such as Huntington’s disease, the worst you can do is to inherit the genes for increased risk.

For example, the APOE gene has been getting a lot of publicity for its connection to Alzheimer’s disease. People who inherit one copy of the e4 variant of the APOE allele have an increased chance of developing the disease, and those who inherit two copies of the allele are at even greater risk. It is important to note, however, that people with the APOE e4 allele inherit an increased risk of developing Alzheimer’s, not the disease itself. In other words, not all people with Alzheimer’s disease have the APOE e4 allele, and not all people who have this allele will develop the disease (NIH).

The flawed idea of genetic determinism can be, for some people, both frightening and paradoxically appealing on some level. It’s frightening because it creates the idea that a health outcome or a certain disease is inevitably coming your way. It’s appealing because it appears to remove the need to make choices.

Jim Fixx, Hero of the Unhealthy

When I was growing up, people would dismiss healthy behaviors by mentioning a famous runner named Jim Fixx (real name James Fuller), who authored the 1977 best-selling book, The Complete Book of Running. Fixx is credited with helping popularize the sport of running and demonstrating the health benefits of regular jogging. Sadly, he died of a heart attack while jogging at age 52. People who dismiss healthy living pointed to Fixx as proof that you could be an avid exerciser and you still might die young. But that’s not the whole story: Jim Fixx inherited a predisposition for heart problems. This means that, without an exercise lifestyle, he may have had that same heart attack at age 40 instead of age 52.

Between the Genes Matters More

When it comes to our choices, epigenetics—what is between the genes—likely matters more than our genes. The epigenetic markers sit dormant and switch on or off based on how we live our lives and the choices we make on a day-to-day basis. (I covered epigenetics in another recent blog.) Despite all the attention given to the genetics of diseases like obesity, Alzheimer’s and cancer, lifestyle and environment will always be the larger factor. We don’t always know exactly what the factors are, but the current thinking is that for most major degenerative diseases, genetics plays no greater role than 10 to 20%.

Back to Alzheimer’s for a moment. The rates of the disease are climbing rapidly as the population skews older. However, only about 10% of cases carry the defective genes for the disease, and only half of those who carry the genes ever develop it. Most Alzheimer’s cases are caused by cumulative brain damage that occurs during life.

Another example to consider: Actor Michael J. Fox’s Parkinson’s was considered familial until three other people who worked with him at the same Canadian TV studio in the 1970s also developed it. These types of findings are causing researchers to realize the significant impact environmental and/or lifestyle factors have on health and disease risk and they are investigating those areas accordingly.

This is about mindset and your approach to life—day-to-day life—more than anything else. The numerous everyday choices we all make. The little choices plus a lot of time determine what kind of body you live in. Your health is mostly determined by the formula Small Choices + Time. It’s not just what you’ve inherited genetically.

As soon as you finish reading this, go dig up your high school class photo, yearbook or a family photo from when you were younger. There is usually nothing in those photos to give you any indication of who will become obese, who will live healthy, who will become an alcoholic, etc. Age is not a mysterious force; it is simply a way to tally how long we’ve been here. You’ve heard the saying about cars: “It’s not the years, it’s the mileage.” The same is true for our bodies. Treat them rough and they wear out. Treat them well and they last longer while performing better. Sometimes it really is that simple. 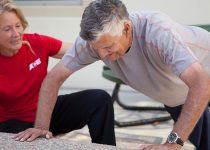