Skip to content
Home
Exercise Science
How Low to Go: Examining Squat Depth From a Safety and Biomechanical Perspective

Should you have your clients squat to a depth where their thighs are parallel to the ground, or should they go deeper? As is the case with so many health- and fitness-related questions, the answer is dependent on several factors. Aside from pain, which is outside the scope of this article, let’s take a closer look at some of the factors that dictate a client’s squatting depth.

There are two dominant approaches when it comes to squatting: squat to parallel or bring the hips as close to the floor as possible. If your clients’ training include Olympic lifting (i.e., snatch, clean and jerk), it’s non-negotiable—they can squat as low as they can go.

But if your clients are training for general fitness, conditioning and strength, the answer gets a bit more muddled. While some people believe that squatting to parallel is safer as the knees are at less risk for injury, others assert that the knees are most vulnerable when performing half squats (down to parallel). However, almost everyone agrees that an individual should not squat any deeper than the point at which the hips start to tuck under and the natural arch of the lumbar spine is lost.

Therefore, for lifters with less than ideal hip biomechanics, there comes a point in the descent of the squat where they will lose the neutral back position. This usually does not occur when squatting without a weighted load. The natural curve of the spine is easy to maintain when performing body-weight squats, but loading a barbell onto your shoulders can change the outcome of the squat significantly.

With the additional weight being carried, the pressure exerted by the heavy barbell on the low back compresses the lumbar vertebrae. To compensate for a limited hip range of motion (due to the shape of the hip socket), some squatters will tuck under their hips, which leads to flexion of the low spine. With its potential for creating serious injury to the low back, particularly herniation of the lumbar vertebrae, tucking the hips is something every squatter should try to avoid.

The solution: Never squat lower than the point at which the hip begins to tuck under and the natural arch in the lower spine is lost. Helping your clients develop proper squatting mechanics with little or no load is key to ensuring the back stays neutral and the low spine stays safe.

It’s also important to select a squat exercise that allows for better motor control of squat movement. For example, the goblet squat allows the lifter to develop a healthy squat pattern without carrying a loaded weight across the shoulders and compressing the discs of the lumbar spine.

And because there is no load on the shoulders, the goblet squat allows for better control of the eccentric movement, improving core stability and core strength. It’s easy to learn, safe to perform and carries all the benefits of a back squat without the risk of the hips tucking under. 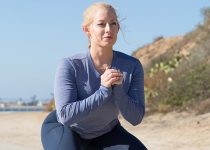