Beginning at age 40, muscle mass begins to diminish. This corresponds to a progressive loss in muscle strength. Unfortunately, power ebbs at an even faster rate. While strength is important, the ability to generate power has a greater impact on our ability to perform ADL. Consider this: An older adult who has adequate strength can likely cross a busy intersection with relative ease. An older adult who is able to generate power, however, can cross that same intersection quickly before the light changes.

A 2003 study published in the Journal of Gerontology, Biological Sciences and Medical Sciences examined the impact of a 16-week exercise program on physical function in adults between the ages of 65 and 90. Thirty-nine subjects were randomly assigned to three groups. Participants in the control group were instructed to continue their usual activity with no intervention. Participants in a second group were prescribed a 16-week strength-training regimen of traditional resistance exercises performed three days a week. A third group performed eight weeks of traditional strength training followed by eight weeks of power training. At the end of the 16 weeks, the power-training group exhibited greater improvements in physical function (Miszko et al., 2003).

Most people can benefit from power training, but a benefits-risk assessment should always be conducted prior to introducing this type of exercise. Power training should be integrated into a program only after the exerciser has a solid foundation of strength and exercise adherence. Additionally, power training is not recommended for individuals who experience joint pain, instability or joint inflammation.

Power training can be accomplished in many ways, but using familiar resistance exercises is a great starting point. Here are a few tips to begin incorporating power training into senior fitness workouts:

Move into the downward phase slowly (e.g., for 3 counts). Next, stand up quickly (e.g., 1 count). Repeat for the desired number of repetitions.

Begin with the arms straight out in front of the body. Inhale and allow the elbows to flex; slowly bring the bar in toward the body. Exhale and quickly perform the pressing phase. Repeat for the desired number of repetitions.

Like traditional strength training, power training can be performed two to three nonconsecutive days per week. The exercise intensity should be somewhere between 20-80% of the client’s 1-RM. Perform one to three sets of six to 12 repetitions. Be sure to start conservatively and build from there.

Centers for Disease Control and Prevention (2013). The State of Aging and Health in America. 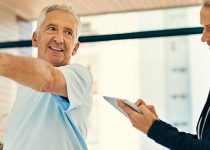 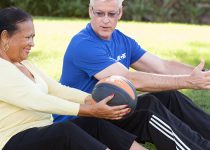